When in doubt, call for the Baron - the first Aliyah Museum, Zichron Yaakov

The early pioneers from the Balkans and Eastern Europe were encouraged by their rabbis to do more than yearn for the Return to Zion. By the late nineteenth century driven by religious idealism and, sometimes anti-Semitic persecution, but little or no idea of agricultural techniques in Eretz Israel, they started to make their way to the land of their dreams and hopes. 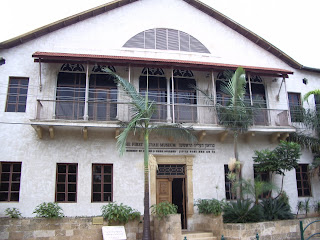 The fascinating First Aliyah Museum, using multimedia presentations and original film clips, takes you back to those difficult days between 1882 and 1904, through the lives of a mythical family, whose story could have been one of any of those who came to Turkish ruled Palestine at that time. Having initially failed to adapt to the harsh environment in which they arrived, they were saved by the vision – and money – of Baron Edmond de Rothschild. As you will learn, however, the relationship between his professional staff and the families was not exactly ‘brotherly love’ and there were even settler riots and protests early on in the history of the‎ y‎ishuv.

The conflict between the religious settler families and the politically motivated Zionist educators, the push for and against Hebrew as a living language as against Yiddish and the eventual understanding that, in agriculture, it is better to work with nature than against it, are all vividly brought to life.

The First Aliyah Museum is located in Bet Hapkidut, the Rothschild administration centre , which was, when it was built in 1882, thought to be the largest and grandest in Israel. Recently redeveloped with funding from the Arison Foundation, in honour of one of the founding families, it is at 2 Hanadiv St, in the heart of Zichron Yaakov, which can be easily reached from Routes 2 or 4, north of Hadera.


To view a google map of this site, click here.