Migdal. Shmultz or pickled, this was the place to be.

Migdal, or Magdala as it was called in Roman times, was a modest fishing village on the northwest shore of the Sea of Galilee, although it appears that it was quite a wealthy settlement. Never a very large village, its inhabitants fished in the north end of the Kinneret and controlled the valley which leads out of the Jordan Rift Valley into the hills of Galilee and the Valley of Jezreel, through the geographical feature now known as the Horns of Hittin. The village had a famous salted or pickled fish industry, sending its produce along the ancient trade routes, eventually reaching the whole of the Roman Empire. The town came to be known as ‘Magdala of the Fishes’ to distinguish it from another town of the same name, which was located just south of the Kinneret. In the Christian bible a woman whose Hebrew name was probably Miriam came from here.

After the destruction of the Second Temple, Migdal/Magdala became the seat of one of the twenty-four mishmarot, priestly divisions who used to serve in the Sanctuary. During the Roman Period, it seems that there were several villas built on the Roman pattern, with baths and mosaics. It seems that the main street, or cardo, was paved, indicating the village was more significant than normal. Very recently, ruins of importance have yet been found there, including those of a synagogue with the carving of a seven branched menorah - probably made by someone who had actually seen it in the Temple in Jerusalem. Whilst this part is still an active dig site and cannot be accessed by tourists, fragments of the paved road, parts of the Roman baths and a foundation, possibly of a synagogue from the 1st century BCE can still be seen.

More recently, it was the base for Trumpledor’s Labour Brigades which helped to open up the roads in the Galilee. 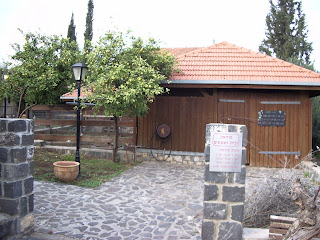 On a site above the lake can now be found the modern settlement of Migdal, with a small artists colony and delightful holiday accommodation. The views of Kinneret are spectacular. The ancient site of Migdal can be found on Route 90 about 3 miles/ 5 km north of Tiberias. The new village of Migdal is located on Route 807, just north of its junction with Route 807.

To view a Google map of this site, click here.
Posted by RCEU at 07:35