At the turn of the twentieth century, the Jewish Colonisation Association bought 100 hectares of land in the Jordan valley, north of Bet Shean. It was their first purchase in the area and pioneers from Zichron Ya'akov started to live there in 1901. After several abortive attempts to settle the area, a group called Achdut, who had lived in the Jerusalem neighbourhood of Bayit Vegan, agreed to start a kibbutz on the site, called Meshek Gesher
(Gesher Farm). They utilised the building materials from a Mameluke caravanserai ( way station), fortifying the dining hall with firing slits in the walls. Little did they know just how vital this precaution would be.
Gesher had for many centuries held a strategic position on the route over the Jordan. The first bridge was a Byzantine Roman Bridge, which had been renovated by the Crusaders and others. In 1905, the Turks built a railway bridge to take the line from Damascus. At the time, it was the lowest railway bridge in the world, at 247 metres below sea level. The third bridge was a road bridge, built by the British in 1925.
Before the Mandate ended, the British withdrew from the nearby police fort and a battalion of the Arab Legion, together with hundreds of armed Bedouins, attacked immediately During a lull in the battle, the settlers decided to evacuate all the children with one parent from each family - so that there would be no orphans. Two weeks later two Iraqi brigades, about 5000 soldiers, joined the attack. The Israelis, now reinforced by two ancient 65mm cannons, succeeded in repelling them all, for the loss of six souls. 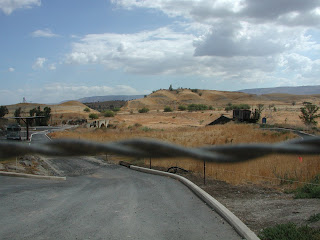 You can visit the kibbutz visitor centre, learn more about its history and enjoy the beautiful Jordan Valley scenery by turning off Route 90, 16 km (10 miles) north of Bet Shean.