The largest of the three main tributaries of the River Jordan is the Dan River, flowing strongly through the northern border region of Israel, both ancient and modern. It is little wonder then that it became a tribal focal point for Shevet Dan when they were forced to migrate from the coastal. The tribe wrested the town of Laish from the Phoenicians and took over their cultic practices: you can read the story in Judges 18: 27-9. They diverted the streams into irrigation canals, but time and lush vegetation have made it difficult to distinguish between natural and man made watercourses now.

Once there was a working flour mill here, powered by the flow of the water and belonging to Abed - a- Salim of Shaba'a village north of the Park ( Shaba'a Farms is a politically sensitive site). Now the nature reserve has been reopened the mill has been restored, but it is just for show. Today the park is one of Israel's gems, with picnic sites, well marked paths and specimen trees identified for the curious - and everywhere the sight and sounds of bubbling streams of life giving (and very cold) water. 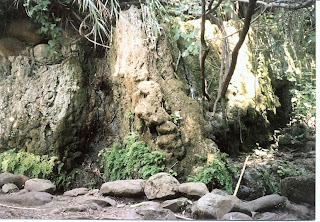 For the archaeologically minded, the park is also the site of Tel Dan, the site of a Northern Kingdom temple, where Jereboam erected a calf statue to discourage worshipers from travelling to Jerusalem. Thanks to the work of famous Israeli archaeologist Avraham Biran, you can now see its gateway, walls, buildings and - perhaps - the bamah, the cultic 'high place' complete with horned altar, originally known in Arabic as Tel - el - Kadi, or the Hill of the Judge. Was the word Dan a corruption of Dayan, becoming in time Kedi?

Whatever the reason, a visit to Park Tel Dan is truly memorable trip for adults and children alike. You can find the park signpost about 10 km east of Qiryat Shemona, on Route 99.

To view a Google map of this area, click here.