Mamshit. Provide a Spice Route B&B and UNESCO will reward you!

The Nabateans managed to do what almost no one else did for about 2000 years. They lived - and indeed thrived - in the depths of the Negev. Just how and why can be seen in the city of Mamshit, first settled around the time of the Second Temple and it will still amaze you as you tour the 350-acre Mamshit National Park, located a little east of Dimona on the main Negev road to Eilat. A UNESCO World Heritage Site, you will see why it earned that title.
Among Mamshit’s highlights is “the wealthy house” with spacious rooms built around a courtyard and a three-story guard tower you can still climb for a fabulous view of the surroundings.
There are two churches on the site with mosaics date from the Byzantine period, when Mamshit attracted Christian pilgrims crossing the Negev. Another typical Nabatean dwelling includes a stable for 16 horses, as the Nabateans other claim to fame is that they began raising Arab horses and it, too, was an important part of Mamshit’s economy.

The originally autonomous Nabateans were great traders and made Mamshit a way station along on the Spice Route, over which they brought frankincense and myrrh out of the Arabian Peninsula via the Mediterranean to Europe. They also tamed their harsh desert surroundings by harvesting every drop of precious water into a complex system of channels, cisterns and dams, one of which was rebuilt by the British Mandate troops. You can see the reconstructed market street and imagine just how welcome it must have been to the tired and thirsty travellers. 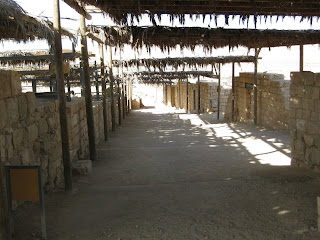 David Ben-Gurion was so inspired by their agricultural achievements that he even urged the rebuilding of mamshit as the new capital city of Israel. Perhaps it was for the best that this was one of his ideas which didn't take on.
So what happened to the Nabateans? Overtaken by Rome, Byzantium and finally the Arab conquest, they simply faded away.

Mamshit is located just east of Dimona on Route 25

Click here for a Google map of this site