The cornerstone of the Galilee - old Rosh Pinah

Driving north from Lake Kinneret on Route 90, it is so easy these days to bypass Rosh Pinah, which would be a great shame, as it is a piece of history of the early modern settlers in Israel, now being restored to something like its former glory. Our story begins in 1877, when a number of families formerly living in S'fat, bought land from the Arabs of the Ja'uni village and tried to establish a Jewish settlement which they called Ge'oni. Five years later, over fifty Romanian pioneer families arrived, liked what they saw and made their homes here. They changed the name to reflect the very stony ground they had to clear. Taking the phrase from Psalm 118, which we read in Hallel," the stone rejected by the builders became the cornerstone", they changed the settlement's name to Rosh Pinah, which means "the cornerstone". The new arrivals tried farming and grew tobacco and started a silk industry. They planted mulberry trees and Baron Rothschild gave each new settler family silkworms and larvae to start them off. The British Mandate saw a customs post erected here as it was the last stop on the route to the 'Galilee panhandle ' and Syria beyond. Gradually the population of Rosh Pinah declined until some twenty five years ago, when a restoration and regeneration project breathed new life into the village. 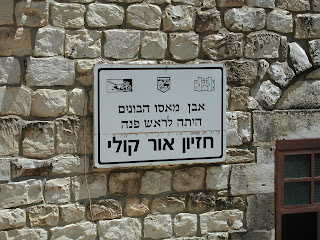 Make your way up to the old cobbled Founder's Street and you can now visit The PICA House (Palestine Jewish Colonial Association) which housed the Rothschild clerks and has now become an exhibition centre. You can also see the 1882 synagogue, the Schwartz Hotel and other restored buildings. With its fine views of the Hula Valley and Mount Hermon, a detour to old Rosh Pinah is certainly worth the effort. You can reach it at the Junction of Routes 89 and 90.

To view a Google map of this site, click here