People started to live at Megiddo over five thousand years ago and it is not hard to see why. Standing on a commanding position controlling a pass on the ancient trade route which connected Egypt to Mesopotamia, this ancient fortified town shows twenty levels of habitation! The site of the prophetess Deborah's victory over the Canaanites and Josiah's defeat by the Egyptians, it may well have only become an Israelite settlement at the time of King David. His son, Solomon, fortified it ( you can see the remains of the standard 'triple gate' of the time) and Ahab built massive stable blocks - not the 'Solomon's Stables' which almost every ancient site claims to have, and very few really did. 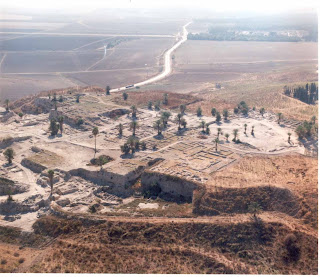 Your walk from the car park will bring you eventually to an observation platform and then to the 'temple square', but the most impressive site is the ancient water tunnel which, hidden from outside view, allowed the defenders to bring sweet water from the spring outside of the city walls during a siege. The inhabitants dug a shaft through the mound within which a staircase led to the tunnel, about seven metres long and three metres high. It was cut on a slope to allow the water to flow to a spot from which it could be drawn up. Ancient technology, nearly 3000 years old, at its best.

Megiddo Junction, Tzomet Megiddo, is at the crossing of Routes 65 and 66, 10 km west of Afula. The site is 2 km north of the junction on Route 66.