How we lived then - Tzippori

Tzippori, or Sepphoris, is located in the central Galilee and is absolutely a 'must see' site. It first appears in the time of the despotic Hasmonean king Alexander Yannai (103 - 76 BCE). After the death of Herod in 4 CE, the inhabitants revolted against Roman rule. Not surprisingly, the city was eventually captured and destroyed. Following this, Herod Antipas, ruler of the Galilee region, set about restoring Tzippori. He spared no expense on restoring and beautifying the city, prompting the Jewish historian Josephus to later call it the "glory of the entire Galilee." Tzippori later gained additional fame when Rabbi Yehudah HaNasi moved to the city with the Sanhedrin, making it the seat of Jewish religious authority. Rabbi Yehudah completed the codification of the Oral Law into the Mishnah in Tzippori in about the year 200CE and the scholars living in the city participated in the writing of the Jerusalem Talmud. Under Crusader and Muslim control Tzippori lost its position of importance. However, its treasures were safely hidden beneath the rubble of the centuries for us to enjoy today. Tzippori is an 'archaeological wonderland'. The main excavations include a 4,500 seat Roman theatre with a spectacular view of the valley below, the Crusader fortress at the top of the hill and living quarters from Mishnaic and Talmudic times, almost all with individual mikva'ot. The most extraordinary aspect of the recent finds at Tzippori is the number and quality of mosaic floors. 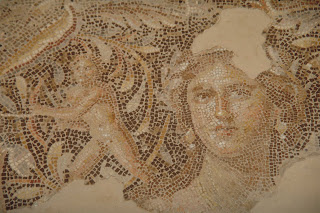 Many Roman-period villas and public buildings (including a recently uncovered synagogue) feature these beautiful mosaic floors, some with clearly non Jewish themes! One villa in particular contains a mosaic of a woman's face that has been dubbed by some the "Mona Lisa of the Galilee", so great and intricate is the work. How the rabbinic leadership of the Sanhedrin accepted this clear violation of the Ten Commandments, we will probably never know!

Tzippori is a site not to be missed and you can reach it on Route 7926,from Routes 77 or 79, north west of Natzret Illit.