As you drive up to Jerusalem, you can let your mind wander back to the heroic fighters for the State of Israel who gave their lives driving the 'Burma Road', trying to supply besieged Jerusalem in 1947/8.
But it would also be easy to forget the soldiers, travellers and others who struggled up through the Judean Hills over the centuries to reach Jerusalem, holy to three great world religions.
they may have stopped - or been stopped - on the way at Ein Hemed, now located just off the main Jerusalem Highway, Route 1.  The site was certainly developed during the Crusader period, most likely as an agricultural settlement and / or as a checkpoint on the route up to the city.  The remains of a large Crusader building are situated in the centre of the site.  Through the main entrance, an ancient oil press remains in the central courtyard.  Some historians think that the site may have been a more ancient Roman one, serving much the same purpose. 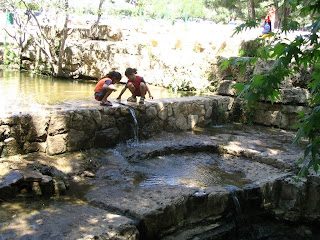 The Crusaders called the site Aqua Bella (beautiful water) because of the magnificent landscape and bubbling brook, essential for serving the garrison. Today, the site has been completely restored and beautifully landscaped, making it a favourite spot for visitors and Israelis alike. The trickling waters, rock pools and shaded picnic areas are an oasis in the dry Judean landscape which still surrounds it. Recently, the site has become a popular wedding location with Israelis and, with suitable lighting, Ein Hemed is transformed into a magical and romantic spot at night.


You can easily reach Ein Hemed by turning off Route 1 at Hemed Interchange and travlleing south for about 500 metres.