Of Pastoralists, Patriarchs and Bridge Builders -The Besor Route

Recently created by JNF, the Besor Route is a 15km drive on an unmade road which will take you back to the times of our patriarchs, then to Philistines, David and most recently, water conservation schemes.

Even though you will be told that winter or early spring are the best times to visit, whatever the time of year, you owe yourself a visit to the Besor scenic route. The scenic road will take you past ancient tells, views of flowing streams and  - for much of the way – a route with orange groves on one side and pure Negev scenery on the other. For some, the highlight will be at the southern end, where a suspension footbridge has been built just, it seems, because the builders wanted to have a go and build one. When you have crossed the bridge you will see what I mean. 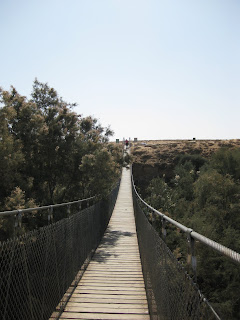 The Nahal Besor is one of the largest wadis in the Negev, draining the western Negev basin to the Mediterranean Sea near Gaza. In Tanach, the bible, the word  ‘Negev’ referred to an area of land south of the Judean hill country and Shephelah that was inhabitable. The Nahal Besor essentially constitutes the southern border of this ‘Negev’ and included the cities of Arad, Beersheba, Gerar, and Ziklag. Some commentators think that this is the stream referred to as “The Brook of Egypt” in the Bible, meaning the border with Egypt.

We are told in Bereshit / Genesis chapters 20 and 26 that Abimelech the Philistine king ruled in Gerar. With famine threatening Canaan, Abraham went down to Gerar and made a pact with Abimelech, leading to an episode that embarrassed Sarah and greatly distressed him.  It was to here that Isaac later returned with his large herds. His shepherds got into an argument with Abimelech’s shepherds over the right to drink the well water…………. but that’s another story.

Later on, the tribe of Shimon / Simeon seems to have found excellent pastures here. You might be surprised when driving the route in summer, but the first rains of winter change the whole picture and the area grows a delicate green coat. No wonder the Simeonites found in them "fat pasture and good."

The Nahal Besor has also been identified with the Wadi Shallaleh and is the location of an interesting episode in the life of David before he became king, when he lived with the Philistines at the city of Ziklag that he was given.  You can read about the surprising tale in 1 Samuel 30.

The route also has opportunities for viewing magnificent birds of prey wheeling in the sky above you. This really is a most unusual trip and not to be missed.

The Besor Route is accessed from route 241, 5km west of Urim junction and it ends at the junction of Route 222.