Remnants of ANZAC, Egyptian and Byzantine life, but look out for the ostriches!

Any drive in the Negev is exciting, but often the cry goes up:”but where can we stop?”
The Eshkol National Park, quite near the northwestern Negev town of Ofakim, between Beersheva and Sderot,Eshkol has extensive lawns, picnic areas, history and a playground. It is a great starting point for a drive along the Besor Stream’s unusual scenic route.

For those of you wanting to stretch your legs a little, a fine view awaits at the top of a hill, known in Arabic as Shalala Ruins, to the north of the national park. During World War I, Australian cavalry troops fought the Turkish army here. Whilst digging in, they also discovered the remains of a Byzantine church with a beautiful mosaic floor, which is now on display in Canberra, the Australian capital. They built a wooden bridge in1917 for a railway line which ran from Rafah to Beersheva from 1918 to 1927 three times a week and its concrete foundations can be seen in the river bed. The bridge was reconstructed in 2004.

The remnants of an ancient Egyptian way-station were found on a small hill in the centre of the park, showing that, thousands of years ago, the area was significant. En HaBesor, the Besor spring, which is a real rarity in this part of the world as it flows throughout the year , emerges at the foot of the hill, creating a warm-water pool, the Sharuhen Pool – 20 degrees centigrade year-round. Although the chance of a dip would be really welcome, the water is very brackish and swimming is not allowed. The British military authorities built the, not very attractive, concrete buildings near the spring to house water pumps for their horses and steam locomotives, as they forged a rail link here between Egypt and Mandate Palestine. They probably didn’t know that about 2000 years earlier, the Romans had built a route from Rafah to the Dead Sea, which also crossed the wadi just south of the pool. Their horses were thirsty, too. 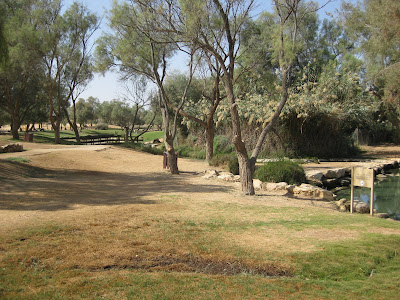 Directions
The park lies about 15 km west of Ofakim on Route 241. And the ostriches? Ostrich farming on the northern side of the road might just distract you as you look for the entrance to the south.
Google Map
Posted by RCEU at 00:28