Tel Hai. A place of roaring lions, heroes and politicians.......

In the far north of Israel, off the regular tourist trail, you can find a monument to one of the pioneer heroes of modern Jewish settlement in our land and you will be reminded of the ways of international politics - as if you needed to be!


The Sykes -Picot Agreement of 1919/20 led to the splitting up of the former Turkish Empire. The French claimed Lebanon, Syria and this part of the country, the British the rest. The situation was complicated by the demands of Emir Feisal who, having fought alongside the British, laid claim to Syria and this part of the Galilee.  It contained several Jewish settlements, such as Metulla, Kfar Giladi and Tel Chai.   The Jews in the area found themselves the unwilling pawns, caught between the Arabs and the French.

Several times Arab terrorist groups tried to attack Tel Chai and the poorly armed volunteers who had come to protect the 'tower and stockade' settlement.  The heaviest attack came on 11 th Adar 1920.  Joseph Trumpledor, a former Russian officer and colleague of Jabotinsky who had spent great efforts in trying to reconcile the squabbling Zionist political factions, had been recently appointed to command the outpost.  A ruse by the Arabs forced him to leave the relative safety of the stockade, allowing a murderous attack to begin.  Overwhelmed, Trumpledor and his brave fighters could not hold out and, mortally wounded in the stomach, he expired with now famous words "it is good to die for our country".

Eight men and women died in this and previous attacks and it is this fact which gave its name to the major settlement just south of Tel Chai - Qiryat Shemona. 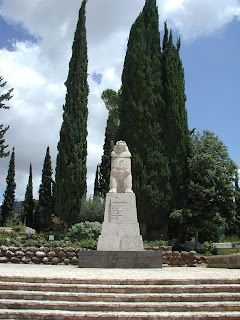 You can reach the famous roaring lion monument, by driving north from Qiryat Shemona and, in about 1.5 km, turning west onto Route 9977.