Hammat Gader must be one of the most unusual of sites in a country which, you will readily agree, is not short of unusual sites! You can swim here in the hot outdoor pools in the depths of winter with snow falling on mount Hermon, just 60 km (37 miles) to the north. Situated at the southern tip of the Golan region, Hamat Gader, along with Tiberias, was a premier resort in Roman times. First mentioned as a Greek city in about 200BCE, it was captured by the Hasmonean king Alexander Yannai, eventually forming one of the ten Decapolis cities, with a type of semi-autonomy under the Romans. The Romans built an extensive network of buildings at the site, incorporating both hot and cold mineral pools for their patrons' pleasure.

One of the most famous visitors and, I assume, regular bathers, was Rabbi Yehudah HaNasi, the codefier of the Mishna. Keen to know that their ablutions and exercise were 'under rabbinic supervision', the hot springs became very popular with other scholars and residents. Most of the Roman buildings have been excavated and partially restored and a modern mineral spring resort has been built on the site. The modern site now blends the soothing comforts of the geothermal mineral pools with fascinating Roman excavations and architecture. By the way, when I say hot, we really mean HOT. With water temperatures ranging between 40 - 52 degrees Celsius, well over body temperature, you may want to take medical advice before swimming. 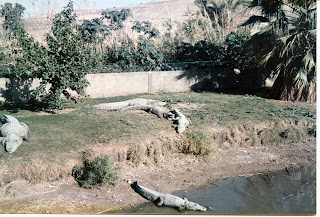 The alligators, introduced some years ago as a tourist attraction, however, do not seem to have a problem. Don't worry. - they live in different pools!

Hammat Gader is well signposted off Route 7599. Turn right at Tzomet Hammat Gader on Route98, which runs along the Jordanian border at that point.