Some three thousand years ago Gideon the Judge tested his eager, but too numerous army at the Ein Harod brook in the Valley of Jezreel . You can read about it in the book of Judges, Chapter 7 . Near the spot, 35 young people from Gdud Ha'avoda raised their tents in 1921 and began resettling the land, building a new life at the Harod Spring, Ein Harod. By the time they moved to their permanent location at the foot of Kumi Hill in 1930, there were 239 members.
1953 the original kibbutz split into two distinct kibbutzim, over ideological differences (Ein Harod was not the only kibbutz to undergo this turmoil). Ein Harod Ichud the new kibbutz that resulted from the split is located just above Ein Harod Meuchad, at the top of the hill. The differences that once were the cause of fierce disagreements - causing members of the same family not so speak to one another - have long since disappeared. Today, both kibbutzim belong to the United Kibbutz Movement and are home to over 1000 people. 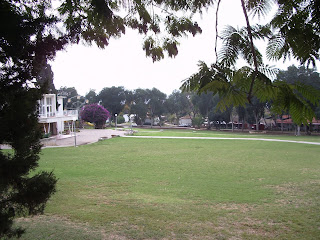 Attractions include an art museum, a petting zoo and 'reptile corner' (which may make some parents cringe). The art museum, with a recent extension designed by the architect of the Supreme Court Building in Jerusalem, Ada Carmi, is located a little further up the hill.
A trip to Ein Harod gives you a range of activities for all the family. You can reach it from Route 71, east of Afula, by turning left at Issachar Junction onto Route 717.

To view a Google map of this site, click here
Posted by RCEU at 06:24