Wash, press and shoot. The secret bullet factory at the Ayalon Institute

In 1945, the Haganah decided to establish a secret plant to manufacture the bullets which would win or lose the coming war of Independence. Built In just three weeks, the underground factory (in every sense) was completed and it code named the Ayalon Institute.

Above ground, a huge 10-ton baking oven (there was a working bakery here) and a large washing machine that revolved on a pivot hid the noise and fumes from the factory 8 metres below. The ‘kibbutz members’ also operated a commercial laundry. Ironically, British officers stationed in nearby Rehovot used to bring their uniforms to be laundered here!

Between 1946-1948, well over 2 million, 9mm bullets were manufactured here for the Sten sub-machine gun, which was the primary personal weapon during the war. At the height of operations, 40,000 bullets a day were made at the institute, the only supply that was not in shortage during the war. 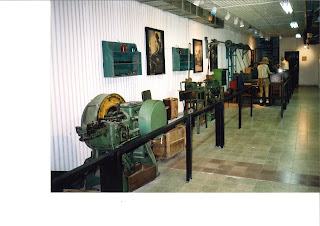 Copper, a vital raw material needed to be imported. Applications for licenses were submitted to the Mandate authorities, who asked why so much copper was needed? The explanation, that it would be used to make lipstick cases seemed plausible enough: licenses approved!

When you tour the institute, you can actually go down the stairs and see the manufacturing area. Visits require a reservation, as currently you can only visit as part of a tour (make sure you mention that you want an English tour when you call –08 940 6552). There is also an audiovisual programme, in English.

For a Google map of this location, click here.